Games of the universe! 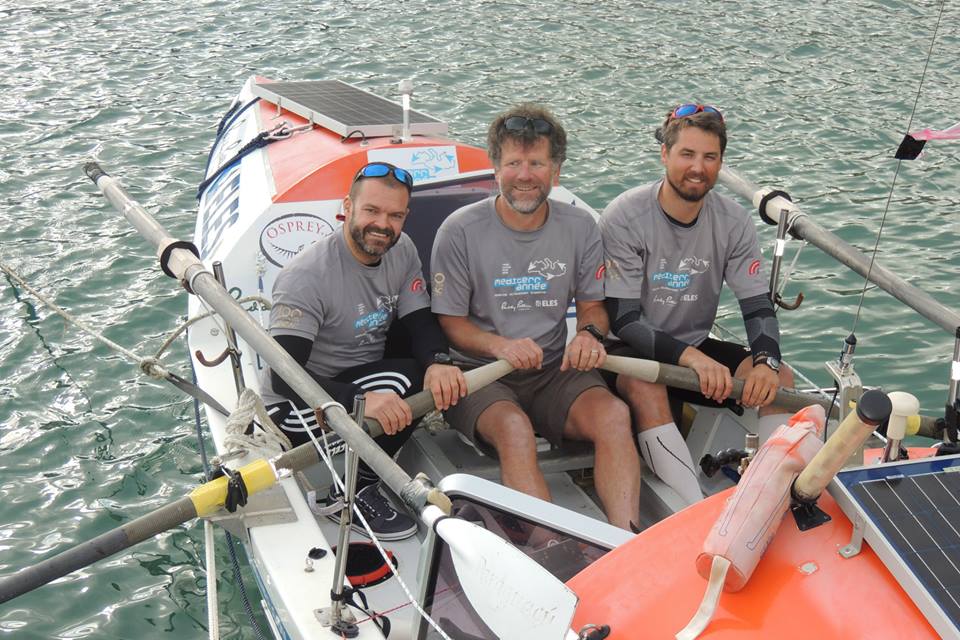 Well the past few days have been a life-time experience!

Sometimes it’s funny how you might plan something for such a long time and how easily things can change radically from one minute to the other. It’s amazing where this change may lead you! Last Saturday we were supposed to be at Chania (Crete) from where Dimitris, Huw & Marin, would row towards Cyprus and then finally Turkey. However the universe planned it differently and Chania were replaced by Foinikounta, a small village at the southern part of Peloponnese. It could have been so many other places, but it was Foinikounta after all! The place where we used to have our family vacations for about 25 years and the place where people know us, love us and were ready to support us. As we would say in Greek, “...pure luck? Don’t think so!”

After a 4hr drive to Foinikounta last Sunday, Dimitris, Eirini, Dimitra and I finally met with the rest of the gang! I can’t describe you our excitement when we saw Huw and Marin, especially after the thriller they had been living for the past 36 hours due to the storms and the strong winds. Huw’s description is most vicarious and deserves to be read! https://www.facebook.com/mediterranneejourney/posts/919498114737453. We were hugging and laughing like old good friends do, even though most of us had just met ;-). 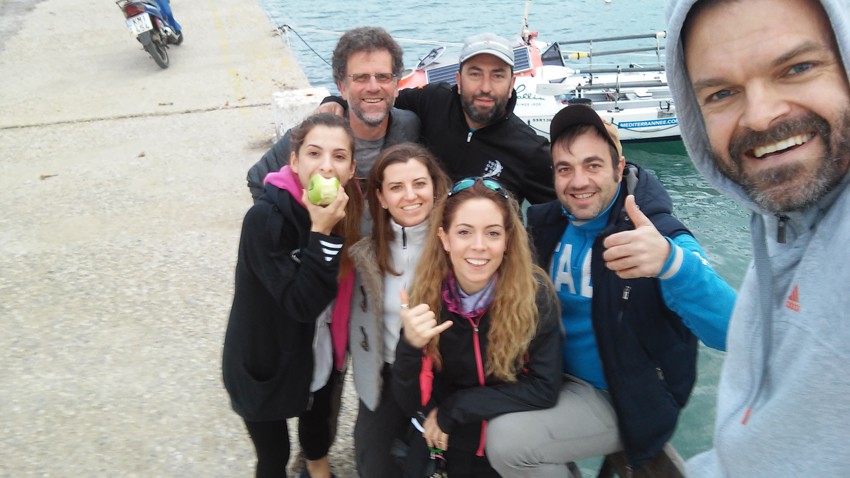 Upon arrival, of course we saw from up close the adored ocean boat Mr. Hops!!! Dimitris’ new house for the next 20 or so days. Seriously it is smaller than it seems from the pictures! A boat built for one, will now accommodate 3.  Its best feature is the Men’s room!!! Hahahaha!!! No room whatsoever!! But no direct access to the sea as well! Everything goes into the magic black bucket! Huw actually wanted to share life on Mr. Hops, so he decided to upload his picture in action ;-)) !!!! https://www.facebook.com/mediterranneejourney/photos/pcb.919498114737453/919494478071150/?type=1&theater 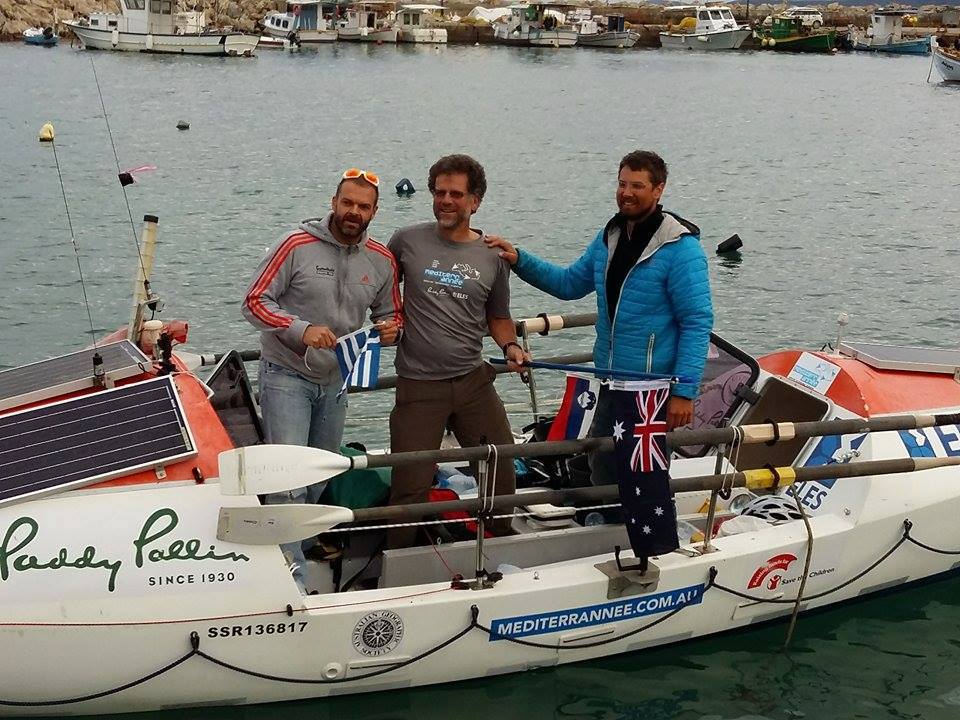 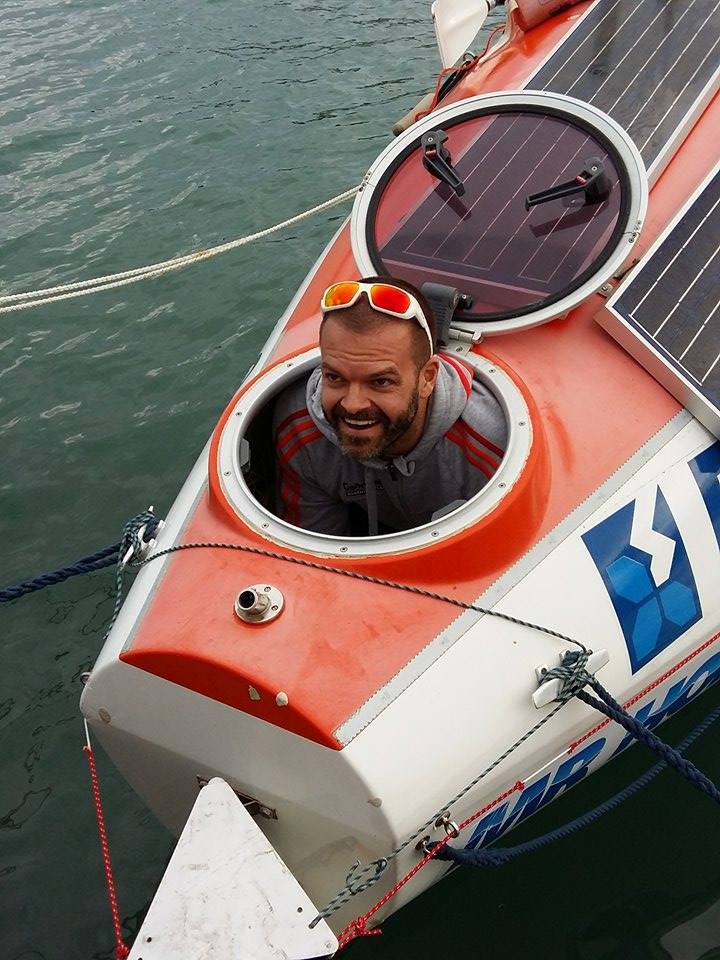 You know, I’ve been meaning to start writing this post since the moment I arrived at Foinikounta... I wanted to catch every single moment and share it with you. But I couldn’t... It was one of these times in my life where I would sense and appreciate every single moment, with my brother, my new and old friends, with all the people of this lovely village that made our stay even more special. But selfishly enough I needed to keep it to myself and digest it. Eirini and I would stay there only until next day, whereas Stavros, Dimitris (special cannibal friend) and Dimitra would stay until the departure of the crew.

I believe the feelings for most of us were mixed. Happy to be together, pleased to find ourselves at Foinikounta, agonized but overwhelmed of Dimitris new adventure and about that moment of goodbye… But hey! The day was saved by the women’s day!!! That night a huge party was going on at Elena Restaraunt where only women were allowed! However since the owner Elias Tsonis insisted, we took our guys and visited the place for a drink. We, women got in through the front door, whereas men entered secretly through the kitchen door and suddenly the quick drink became platters of food! Dimitra had a fantastic idea to announce and present the project, Marin, Huw & Dimitris, who appeared with their heads through a small window to a 100 women! As Huw described it, a marvelous applause and no tomatoes thrown!! hahaha!!! Here is what happened! 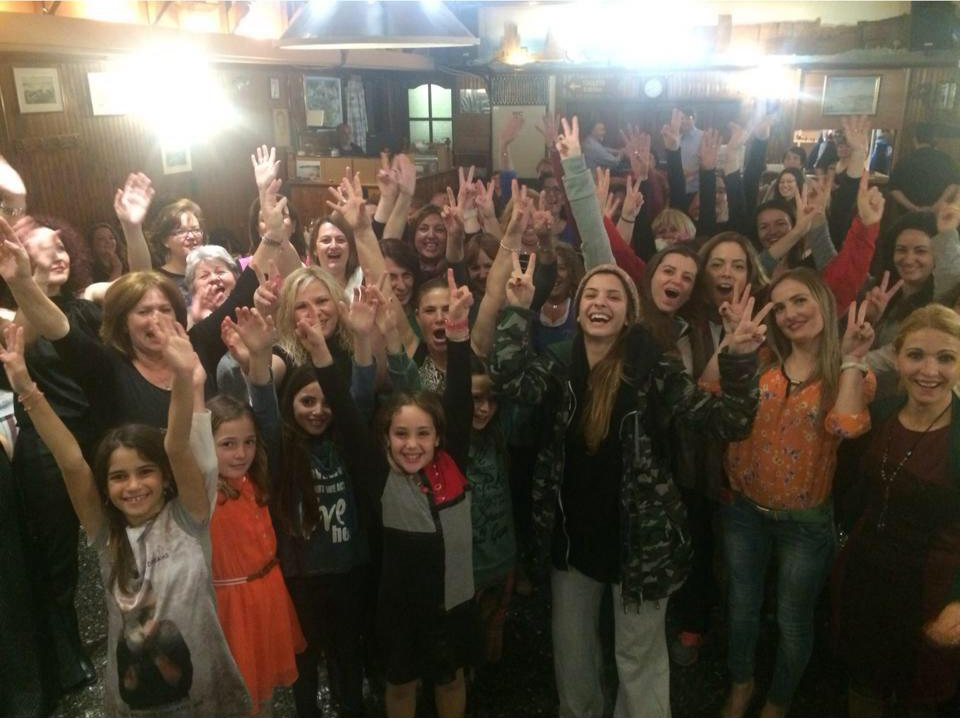 Then the sun rose again [time goes by so quickly, especially when you just want everything to move in slow motion] and as we were taking our breakfast at Vassilis and Sonias place at Votsalocafebar, having turned the place literally to our small office… surprise-surprise! A small dot is shown in the horizon, and as the dot becomes bigger and the image clearer, a kayaker appears! Another crazy adventurer, good friend and collaborator of the Cannibals Adventures Team, George Lilas, whose base is at Ithaca island! Kayaking solo all the way from Crete to Ithaka, like the lonely cowboy! Extraordinary! George had delayed his trip for about a week due to the bad weather conditions and suddenly we all found ourselves all together at the same place and time, without having planned any of this! Games of the universe! 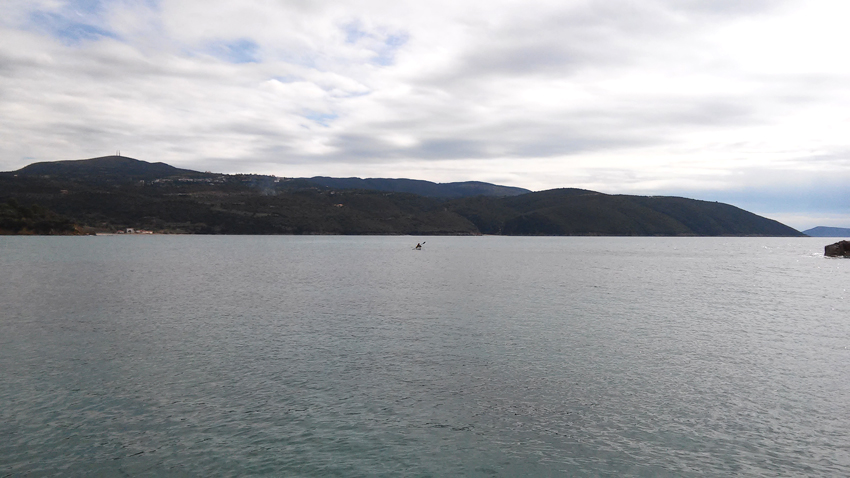 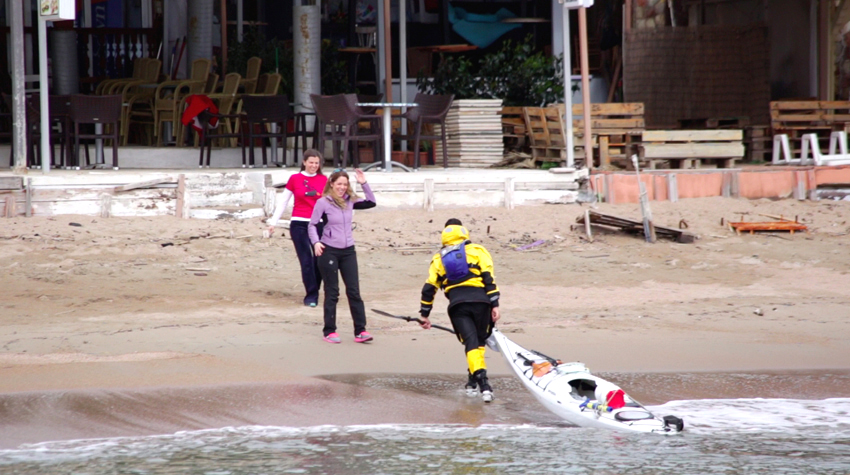 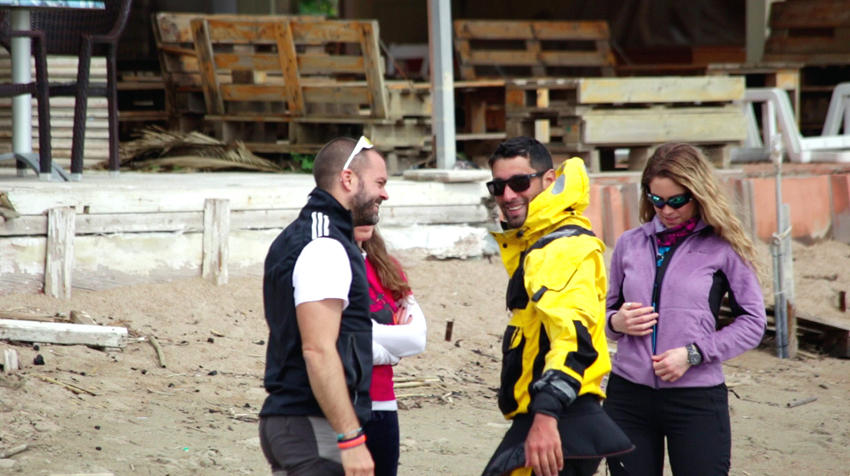 After arranging all technical details with the Hellenic Coast Guard; and please let me mention here how impressed we all were about the way they welcomed us, treated us and how much they seem to love anything that has to do with their main environment of action, the sea; we headed to the super market for the journey’s supplies and finally had our last dinner all together before Eirini and I returned to Athens. Elias Tsonis and his brother Nikos had promised us fresh fish soup! Couldn’t be any better! 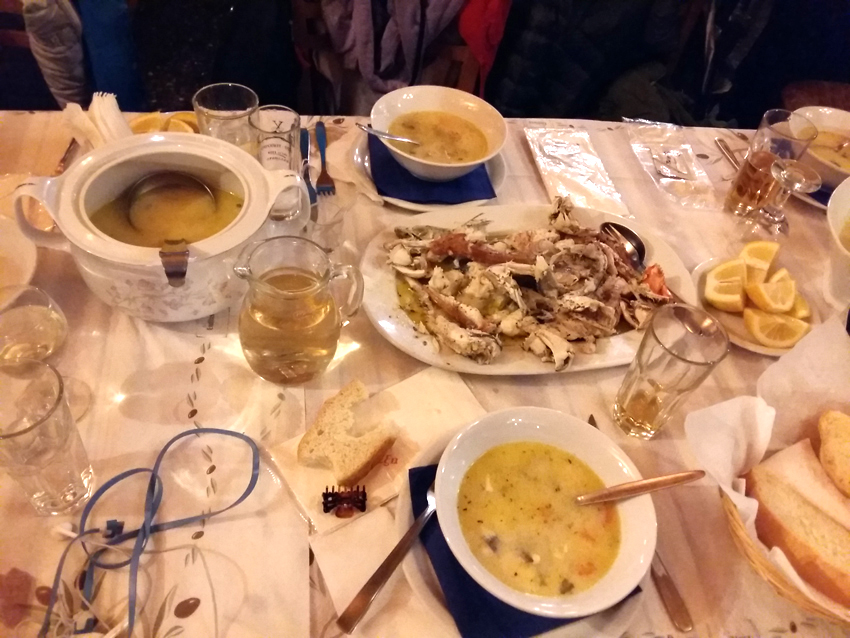 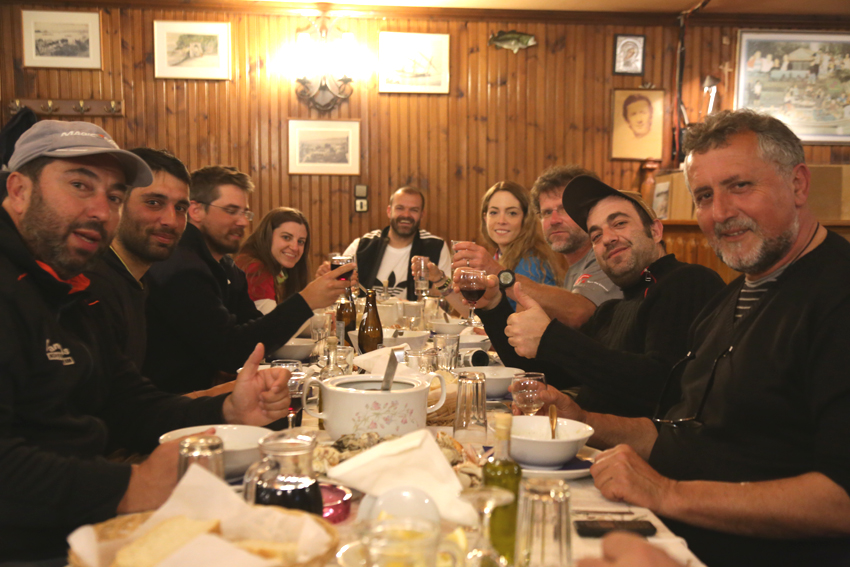 At that time the day of departure had almost been decided; it would be Wednesday as a small break of the heavy weather systems was predicted.

...and that time arrived in a blink of the eye! Wednesday evening at around 16.30, after having arranged all last details and sharing last thoughts and feelings, Dimitris, Huw and Marin board on Mr. Hops and started to row! 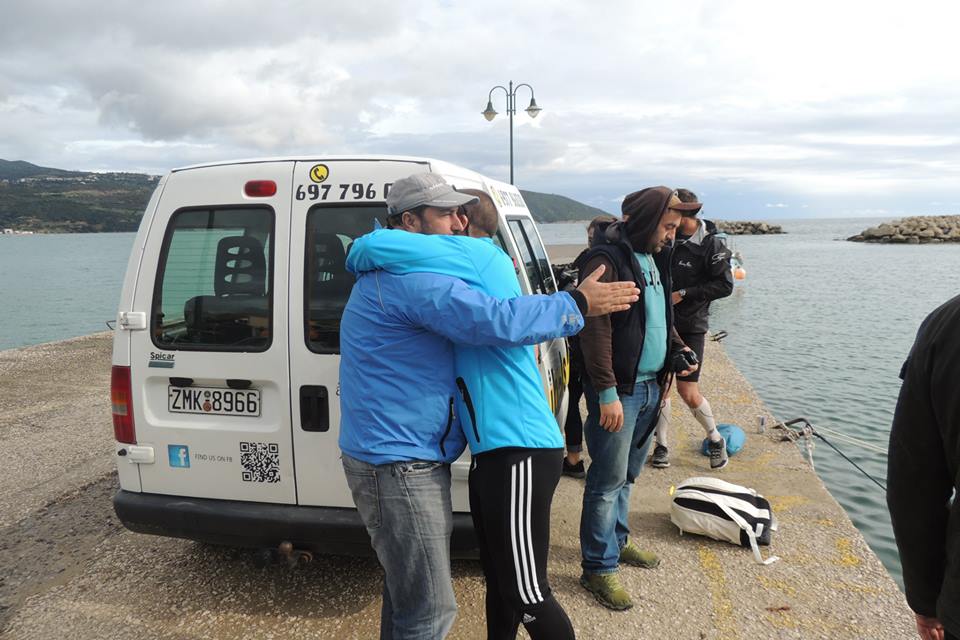 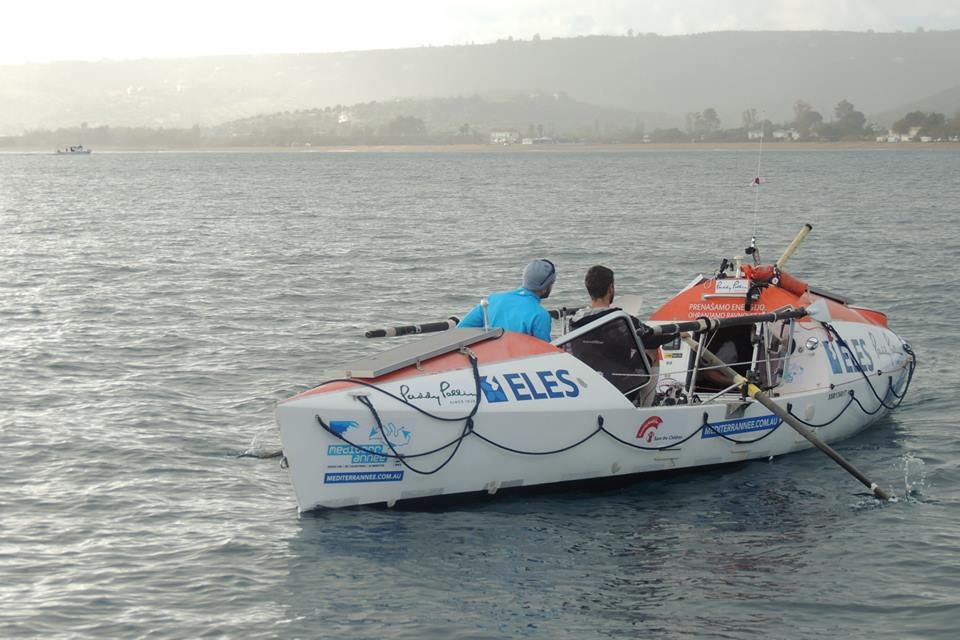 The route has changed for Huw once again. Instead of paddling to Turkey through Crete and Cyprus, the crew will now row through the Aegean Sea directly to Fethiye, Turkey. The journey has begun and the first days have been predicted to be nothing but challenging. After a short landing at the region of Elafonissos to wait for another weather system to pass, Huw, Dimitris and Marin decided to make a pit-stop at Monemvasia as nature dictates their process of paddling. This might take a few days. As Marin mentioned earlier throughout this trip “This is so much harder than rowing the Atlantic with it's consistent swell, it's predictable wind”. But no matter the difficulties, the crew continues until the mission is complete.

This expedition is an extreme way to spread the extreme inhuman conditions of other people’s lives, especially the lives of tomorrows citizens of the world who lack everything we have the chance to take for granted! Visit the Save the Children to found out more, but most of all spread the word and create better days for Syria’s young victims of the civil war (Huw's Save the Children fundraising page).

The time is now almost 02.20… time to sleep! Sweet dreams everybody!

PS: Many many thanks to sweet Maria Korakakis and her husband Antonis, who got worried like true parents ;-) and provided us last minute accommodation to half of our team. Same goes to our lovely Sonia and Vassilis - who accommodated the rest of us and let us feel at home, creating their cafe as our team’s office, and eating at Sonia’s family restaurant whenever and however we liked. Couldn’t thank more Elias and Nikos (Elena restaurant) whose dinners made our overwhelmed nights more special. Last but not least, many thanks to all those people from the Hellenic Coast Guard, the cafe underneath, people from Pylos and Foinikounta and many others of the region who found out about the project and were as inspired as to spread the word and pray for the crew’s health and safety.

Thank you all so very much! 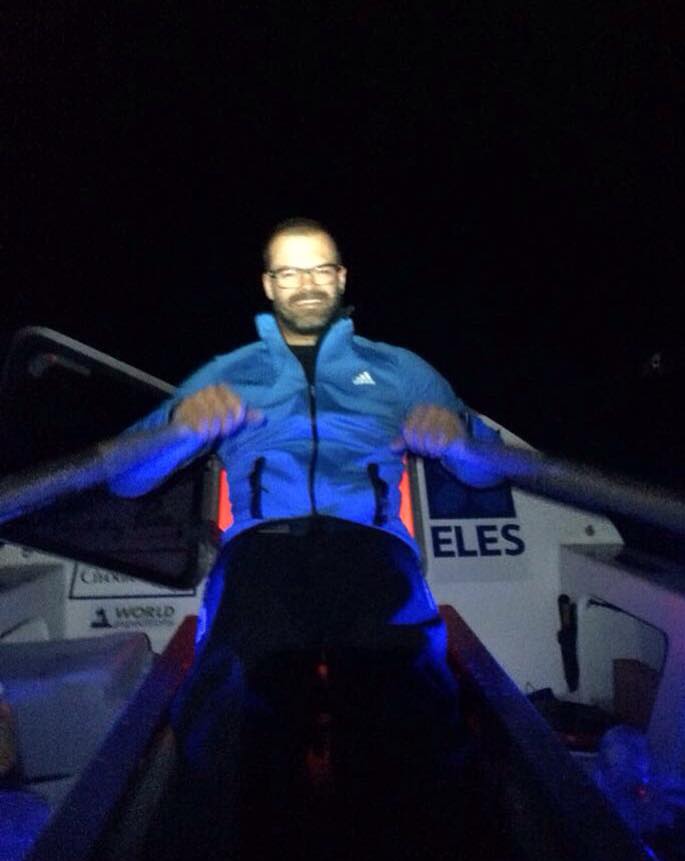